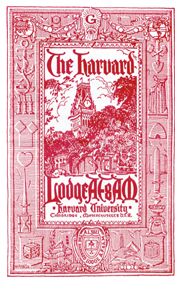 The Harvard Lodge A.F. & A.M. was instituted on May 18th, 1922, as the first Academic Masonic Lodge in the United States. The Lodge was founded primarily through the efforts of Roscoe Pound, Dean of Harvard Law School, and Kirsopp Lake a Professor at Harvard Divinity School. The thought of forming a Masonic Lodge at Harvard had been around for some time. The earliest record of an attempt to establish a Lodge at Harvard occurred in 1863. At a private meeting of 14 Master Masons, it was decided that a new lodge in Cambridge be formed.

The direct origins of The Harvard Lodge stem from a few other Masonic clubs and organizations that were functioning at the university in the early 1900s. These included the Harvard Masonic Club, The Square and Compass Club, and the Harvard chapter of the Acacia Fraternity.

Harvard University
The Harvard Crimson
Head of The Charles